The command file is a list of tasks for the Solver. All commands are processed sequentially, in the order specified by the user.

Creating a command file is an essential part of adding a project to a queue: without it, the solver does not know what to do with the project. Besides being used in the queue system, the command file has other interesting applications:

let's create a command file together

Previously, you had to create the command file manually, searching the documentation for command names and placing command.txt in the project folder, but now everything has become much easier.
So, let's create a command file. To do this, we'll open FvTerminal and choose the project we want to work with. Right-clicking opens a context menu that displays a set of commands. Among these is "Create command file". 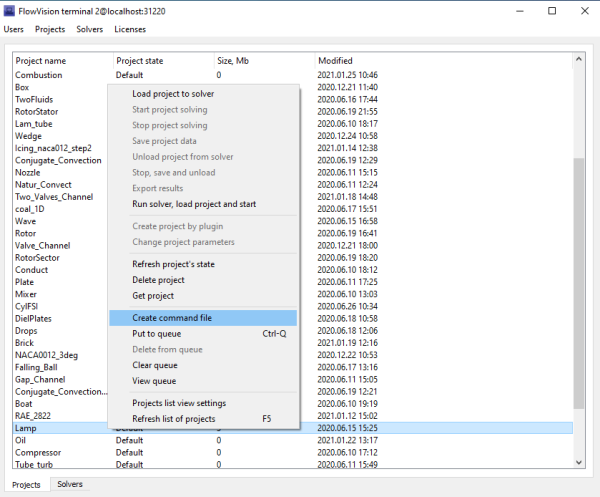 When the command is executed, a new "Command file creation" window appears. 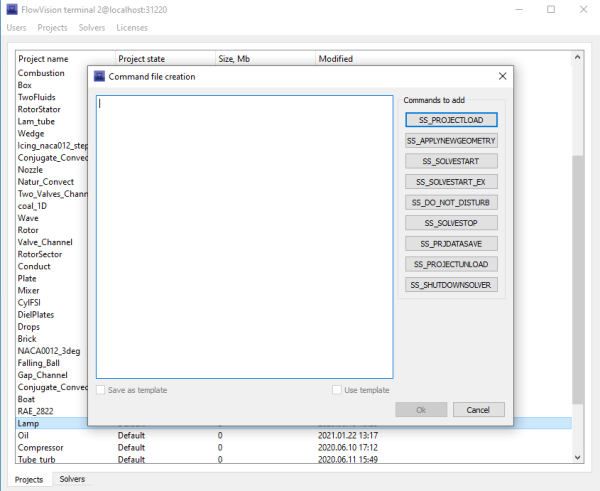 In this window, you create the sequence of commands that will be executed for this project. A list of possible commands is presented to the right of the input window, and a detailed description of each can be found in the documentation.

As a result, the command.txt file will be created in the server part of the project.

If a command file (command.txt) already exists in the client project folder, it will automatically be opened in the “Create command file” window where it can be edited.

Also FvTerminal gives you the ability to create your own template command file. This is so that, for example, you wouldn't have to type the same commands ten thousand times when placing projects in a queue. Memorizing a set of commands in the input window and assigning it the status of a template occurs when you select "Save as template" Then, whenever you select "Use Template", the command file will be generated on the basis of this saved template.

A template command file for placing a project in a queue contains the following set of commands:

Two things that should be noted if you create a command file in Terminal: 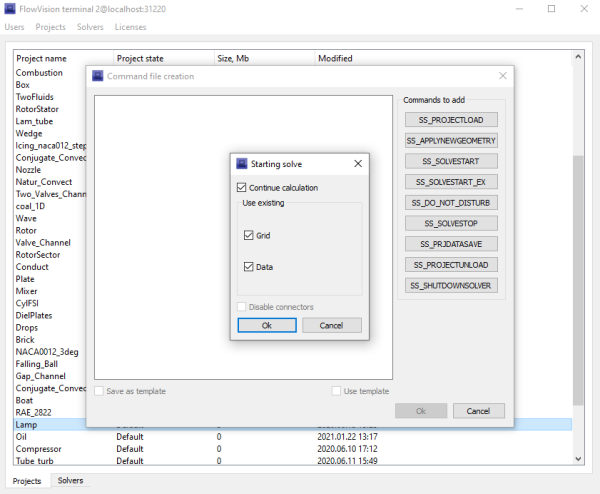 QUEUE SYSTEM OPERATION AFTER LAUNCHING A simulation through A COMMAND FILE

When the command file is ready, you can execute the "Place in Queue" command.

By the way, you can create a command file even at this stage - you will see a special button in the window.

The first projects in the queue will start to be calculated with the status "(A) Calc". This means that the solver is working in an autonomous mode and neither PPP, nor FvTerminal can terminate the work of the solver from outside. The solver will continue working until the solution stops in FlowVision. You can connect to a running solver only via FvViewer. You can terminate the work of such a solver through the Task Manager (process FvSolver64.exe) or by closing the solver console window. The rest of the projects will have the status "In the queue".