What is unique with FlowVision? 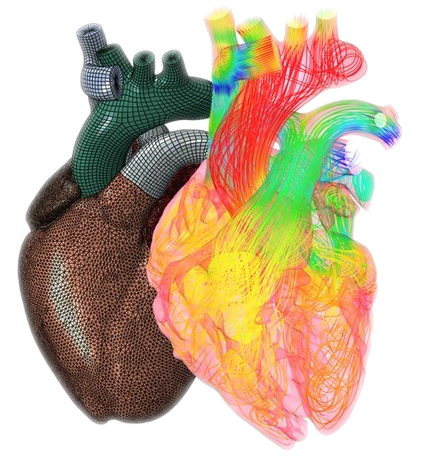 The first requirement for computational fluid dynamics/fluid-structure interaction simulations is defining the flow domain and mesh it. Traditionally, the flow domain is either extracted manually by the user from medical imaging data or represented using an idealised geometry. Once extracted, the flow domain needs to be discretised into a suitable mesh. Given the intricate nature of the cardiac geometries, these steps are often highly time-consuming and present a significant bottleneck in the simulation workflow.

One of the unique features of FlowVision is that the user does not have to define the flow domain manually; instead, it is done automatically by FlowVision through its proprietary Sub-Grid Geometry Resolution (SGGRTM) technology. As soon as the geometry is imported, FlowVision generates a highly quality Cartesian grid around the geometry. This Cartesian grid is then intersected with the underlying geometry to generate the perfect boundary conforming computational grid. SGGR makes it possible to use the real geometry instead of topologically approximated features, thus increasing the numerical accuracy of the simulations. Through automatic extraction of the flow domain, the user does not have to manually extract the flow domain, meaning those valuable hours can be spent refining the physics and post-processing the simulation results.

As most biological tissues are highly elastic and relatively thin, they can undergo thorough extreme deformations in short time periods. An example to this could be the behavior of heart valve leaflets. If the user is interested in simulating such physiologic scenarios in their fluid-structure interaction (FSI) simulations, traditionally speaking, they can either opt for the Arbitrary Lagrangian-Eulerian (ALE) or the Immersed Boundary (IB) approach.

Thanks to the underlying sub-grid geometry resolution (SGGR) method, FlowVision offers a unique, robust and reliable FSI solution. As with the IB method, the underlying computational grid in FlowVision is static; however, unlike the IB method, this computational grid is generated by physically intersecting the initial Cartesian grid by the solid boundaries (SGGR method), thus providing the user with a perfect boundary conforming computational grid.
Because FlowVision works with a perfect boundary confirming grid, the wall shear stress on the surfaces of the deformable bodies can also be evaluated efficiently and accurately, just as in the ALE approach. If the sequence of various deformed configurations of the biological tissue over a cardiac cycle is available to the user, in that case, FlowVision can easily import those deformed configurations at the desired time points in the cardiac cycle and can smoothly interpolate the geometries between two consecutive time points.

Different biological tissues can contact one another during a cardiac cycle; for example, three leaflets of the aortic valve come in complete contact during diastole. This complete contact between biological tissues presents a numerical challenge for traditional fluid-structure interaction (FSI) algorithms. When the solid tissue comes in complete contact with the neighbouring tissues, the fluid mesh between these tissues must “disappear”, which is not numerically. As such, users either have to leave a non-physiologic gap between the tissues or use artificial numerical tricks, such as proximity defined porosity as a workaround.

Unlike its 'competitors', FlowVision can model the complete contact between biological tissues without having to use any numerical tricks or additional models. In essence, this challenge is not unique for cardiac modeling: Good examples from other industries are valves in internal combustion engines, industrial sealings etc. This means, an existing technology is naturally addressing the need in cardiac simulations, no numerical tricks!

The physiologic relevance of the cardiac simulations depends on using the correct boundary conditions. Traditional boundary conditions available as standard in most general-purpose computational fluid dynamics (CFD) packages are often inadequate for cardiac simulations. Users have to design their own boundary conditions in the form of lumped parameter networks, such as the three-element Windkessel model, and couple them to the inlet/outlet of their flow domain. Users must write their user-defined functions or user-subroutines in a programming language compatible with the CFD package they are using to design such boundary conditions. Writing such UDFs and user-subroutines not only requires expert knowledge of the computing language but is also time-consuming and tedious.

Solution 4: Ability to use Windkessel and similar LPN models

FlowVision offers a sophisticated and thorough in-built Formula Editor that can be used effectively and efficiently to code lumped parameter networks interactively within FlowVision without writing an external user defined function or user-subroutine. This feature is quite lucrative as it enables the users to streamline the entire process of customizing the boundary conditions for cardiac simulations.

What is unique in FlowVision & ABAQUS FSI?

What FlowVision CFD & Abaqus FEA (Dassault Systèmes) coupling offers is a connection between FE and CFD meshes without introducing any intermediate structures into the FSI layer. This allows to link different mesh types with different discretization levels and ensures a fully conservative (no data loss) bi-directional data transfer between structure and fluid simulation domains. The approximation accuracy of the governing equations in each code is maintained in both simulation domains and the FSI layer. This eventually helps the device designers and cardiac researchers to perform the most challenging FSI simulations in an extremely accurate manner and without the conventional FSI burden.

Thanks to the latest advancements in the medical imaging technologies, it is now possible to obtain accurate 4D representations of the cardiovascular structures. These representations are “one-click” imported to FlowVision and patient-specific CFD is conducted. Be it a digital cardiac device implantation or complete heart simulations to reveal flow anomalies; patient-specific, medical imaging based CFD/FSI with FlowVision is both reliable and engineer friendly. FlowVision relies on its native technologies for medical imaging based simulations. This means, the proven FlowVision technology that has been being developed for different industries for more than 25 years, is readily applicable to these simulations without the necessity of any special treatment. As an example, Gap Model, a leakage model to solve dimensionality issues in CFD simulations is extensively applied in cardiac simulations.

Capvidia is the CFD simulation partner of the Living Heart Project aiming to integrate FlowVision and Abaqus for a realistic simulation of blood flow in a beating human heart taking into consideration the fluid-structure interaction between blood, heart tissues and artificial mechanical valves. 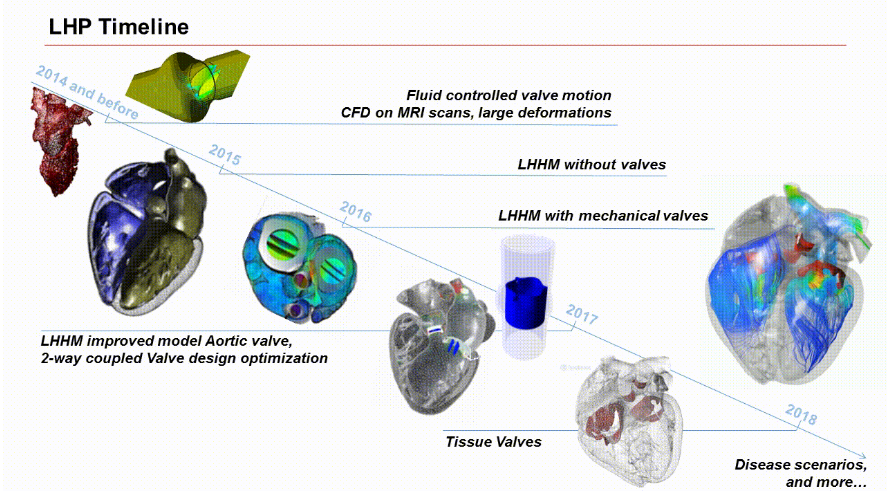 In the present paper the simulation of the explosion of condensed explosives in the air. The method ...

The paper is devoted to the mathematical modeling of the dynamics of geophysical flows on mountain s...

In this paper, the modeling and simulation of the blood flow in the real patient heart is described....

Cardiovascular disease is the leading cause of death in developed countries and continues to drive s...

Prosthetic heart valves deployed in the left heart (aortic and mitral) are subjected to harsh hemody...

Still couldn't find what you are looking for? Request a call or write us