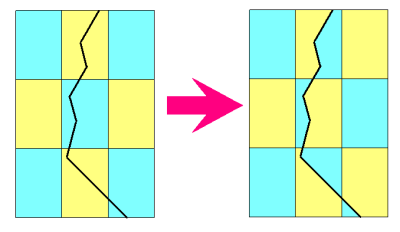 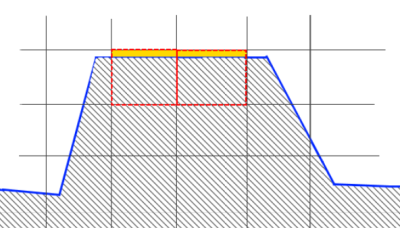 In Solver tab > Advanced settings -> Small Cells you can see what is criterion for marking cells as Small cells.

Be default specified Absolute criterion with value = 0.2. It means that if volume of cut cell less than 20% of original cell such cut cell will be marked as small.

In case of 2D simulations, especially axisymmetric, size of almost cut cells can be much smaller than original cells. In this case is necessary to use Relative criterion of small cells. Relative criterion allows comparing cell with biggest adjacent cell, not with cell before cutting.

Dynamic criterion means same things but volume of cell will be compared with oneself on previous time step.

Why FlowVision need to mark some cells as Small cells

Shape and size of cells in FlowVision can be very different. FlowVision allows to work with very complex 3D models and allows calculate free surfaces with VOF method. After building of computational grid it is possible that part of cells will have extremely small volume relative to most of other cells.  It means that in System of linear equations will large difference between coefficients and solving of such system will be unstable, system will have bad convergence. For us, for CFD Engineers, it means that we will have bad convergence or divergence of simulation.

In FlowVision this problem solved with using of Small cells. Very small cells which were marked as small cells will not be calculated. But volume of this cell will be combined with nearest large neighbor. See example on the fig. 4.

On the right side in fig 4 with red line shown new cells which will be created after combing of  small cells with neighbors.

Small cells method allows excluding extremely small cells from computation, but allows saving accuracy with taking into account of volume of such cells.

In several specific cases it is possible to get incorrect computational grid after applying Small cells. 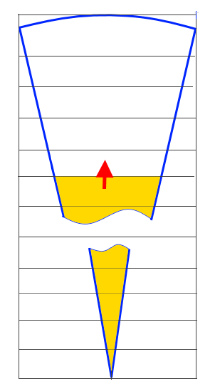 In such tasks we have mesh with only one cell in one of directions. And initial rectangular cells will be cut by main geometry surface. Cells near axis of rotation will be very small relative to initial cells. And absolute criterion will mark these cells as small. And near these cells there are no large neighbor. In this case each small cell will be added to each other while last of them will not find large neighbor. On the fig 6 shown that many yellow small cells will be combined with normal cell which located far from axis. And half of computation space will be resolved only such one large cell.

That is why in axisymmetric tasks is necessary to use Relative criterion of Small cells. Same reason for using relative criterion is possible in some 2D tasks when initial cells much larger than cut cells. 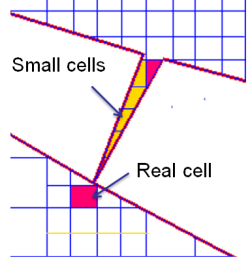 If you have small clearance all cells in such clearance will be marked as Small cells.  And all such cells will be combined with nearest normal (Real) cell. It means that two part of flow will be connected not through some resolved clearance but through only one cell. Only one cell can’t give correct pressure drop in clearance and it is possible that we will have two neighbor cells with very large gradient of pressures or velocities or temperatures.

In such cases is necessary to exclude such clearances (if we do not want calculate flow in clearance) . For example it is possible to change 3D model or (if it is moving bodies) eliminate clearance by intersection between bodies.

Or we can use gap model (instead direct resolving of clearance by computational grid).

If there is some closed volume which fully consists from small cells and these cells can’t find normal neighbor, all small cells in such volume will be marked as Bad small cells.

All Bad Small cells will be excluded from simulation absolutely. It is not computational cells. It is necessary to make something with such volumes. Usually it is result of intersection between two bodies:

Bad small cells let us know that something with computational grid is not OK. And it is necessary to check quality of 3D model.