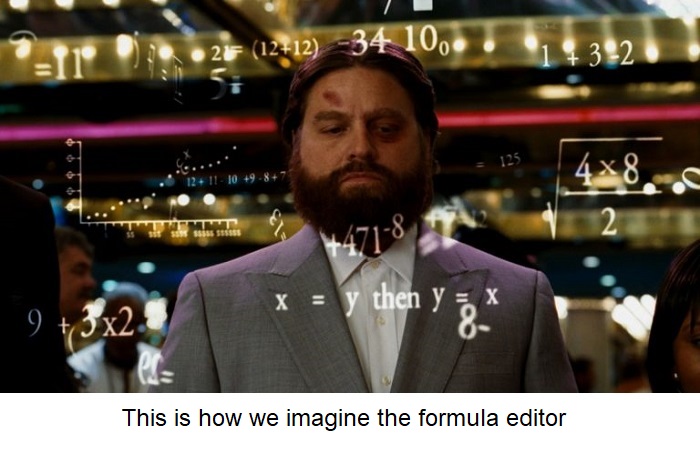 Formula editor from A to Z

You can use formulas in FlowVision to set any variable: from the gravity vector to the law of a moving body motion. All this became possible with the formula Editor. Using the formula Editor you may calculate composite functions, set the physical laws of variable changings and even set the level of adaptation for the calculation grid depending on the step number (and much more!).

In this article we will show how this functionality can significantly simplify the user's life.

There are several ways to set the value of a variable in FlowVision, namely by using:

We will consider the second way to set the value of a variable - using a formula.

Features of the formula editor

The formula Editor is a component of the Pre-Postprocessor that FlowVision uses to work with formulas. Formulas can be used to set values for variables from substance Properties, Boundary conditions, Initial conditions, Modifiers, User variables, and so on. As an experiment, you can open a FlowVision project and run through the project tree. It turns out that almost everything can be set using formulas – from the gravity vector to the law of motion for a Moving body.

In fact, the formula Editor allows you not only to calculate variable values based on specified formulas, but also provides a wide range of functions that are already built-in and ready to use. This set exceeds the basic options of an engineering calculator and contains more complex and relevant settings for a CFD engineer. You may also program your own non-trivial functions in the formula Editor using a wide range of operations, including logical, statistical, and external ones.

toolbox of the formula editor

To create a law, according to which the value of a variable will be calculated, you should: 1) select the variables that will make up the function; 2) link them with operations. Let's look at each of these steps in details.

Variables of several types can be used for constructing formulas (this is described more specifically in documentation). The formula editor window Variables & constants contains six tabs.

Once we have defined the variables we need, we will proceed to consider how we can handle these variables.

Firstly, as we have already said, you need to give a name to a variable, by which it will be accessed. To do this, just make a double-click on the desired variable and the formula Editor will automatically offer you a variant for a name of this formula and you can change it using the Latin alphabet. After you will add the name, it will appear in the References tab.

Secondly, to get a formula, you need to apply operations to variables.

The Operations window contains tabs with different sets of functions. Let's have a look at it (or you may read about it in the documentation):

Of course, you can use formulas to set any complex function for calculating a variable. But we'd like to tell you about some useful techniques for the formula Editor. The most importaint application cases in calculations are cases when it is necessary:

In the formula Editor in the Variables & constants All > Common or All > Phase N window, find the Temperature variable and double-click it. Do the same for the second variable – Integral > Internal characteristics > Reference temperature.

Please note that you can make comments in the formula by putting // at the beginning.

After creating such a user variable, it can be used for calculating Characteristics, building layers, postprocessing, and so on.

Sometimes, if the required variable value is set immediately during the calculation, the solution becomes unstable. In this case, you may set the variable smoothly, depending on the step or time. It is also convenient to set the step dependency for such an important stage of project work as grid convergence research. For example, in the beginning, the adaptation is disabled or its level is low (the maximum level = 0-1). And then the engineer begins to fine-tune the grid gradually, ensuring that the results remain unchanged as the number of control volumes increases. You may simply set the formula in different ways  instead of doing this manually,.

This variable is also often used for creating adaptation by condition

A SMALL note ABOUT USER VARIABLES

It is very difficult to describe all the possibilities of using the formula Editor in one article, since it covers all the FlowVision functionality. Therefore, if you have any specific questions, please contact us in tech.support (This email address is being protected from spambots. You need JavaScript enabled to view it.), we will respond to you, and maybe even write a new article or add some information to this one.