Parallel simulation in FlowVision. What is necessary to know to be faster

In this article you will read about parallelization in FlowVision. It is necessary to understand several features, if you want to get a maximum from advantages of parallel simulations. 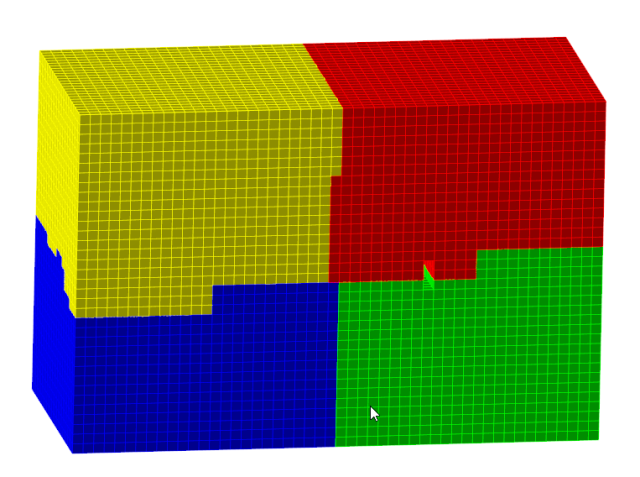 On each processor will be run one copy of Solver which will solve own part of computational grid.

Why is not possible to accelerate infinitely. Data exchanging between processors

But when each Solver will solve flows (heat flow, flow of mass and etc.) in cells, sometime it will need to know data from neighbor parts of grid which located on other processors. It means that Solver will request data from other processor. But this exchange of data is very slow process. To ask data in RAM is faster than to ask data from RAM on other node of cluster through the network.

If we want to minimize exchanges, we need to minimize area of borders between processors. FlowVision uses special algorithms for this.

After 180 processors simulation will be decelerated.

Plot which shown above is an illustration of scalability. Scalability shows how increasing of number of processors (or cores) will accelerate simulation. Scalability it is not only property of CFD software. Scalability depends from hardware, software and from features of CFD problem and grid.

Ideal scalability is a straight line. It means that increasing of processors in 100 times will give acceleration in 100 times. Unfortunately, in reality it is not possible.

Scalability depends from many factors. Not only from count of cells and hardware. One of important factor is a how computational grid will be built.

On the picture below you can see result of local adaptation (second level in the volume). You can see that “yellow” processor has many adapted cells. Other processors have less count of cells. It means that yellow will continue simulation when green, red and blue processors finished calculations. It is illustration of misbalance of calculations. 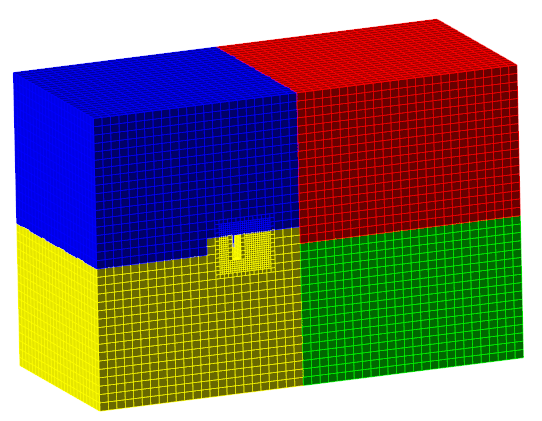 But it is too hard task if:

These problems can be solved (or solved partly) with Dynamic balancing.

Bottleneck. How hardware influent to scalability

Data exchanging between processors occurs through the RAM. Each thread on each core also store most part of data in the RAM. Each process from each core go to the RAM for new portion of data for calculation. All cores of one processor uses one memory bus.

If count of cores too large we will have bottleneck effect:

That is why parameters of RAM is more important than parameters of CPU when we talk about CFD simulations. When you choose hardware, you should prefer larger speed of RAM and more count of RAM channels.

Bottleneck effect also is a reason of effect when using of 80% of cores of one processor will give more large speed then using of 100% of cores. That is why large count of cores in processor is not every time good.

Hyper-threading (HT) is technology, which allows to employ on processor twice much threads than number of physical cores. This technology sometimes allows to achieve better computational performance (up to 30 %). Usually this speedup is possible for computational tasks which have relatively small amount of cells and when computations performed on single personal computer. When a significant number of processors are employed (e.g. cluster, HPC), using HT technology increase of quantity of exchanges with RAM and therefore bottleneck effect may be aggravated. As a result it may lead to decrease of calculation performance. 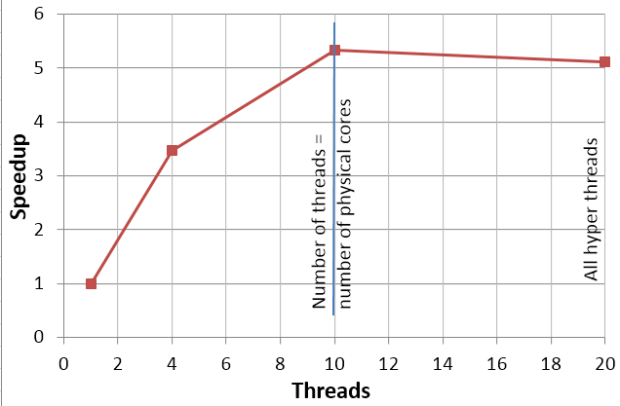 By the reason mentioned above on those HPCs, which is generally prepared for CFD computations, HT option usually disabled. It may allow to increase the computational performance and scalability limit (curve upper point). 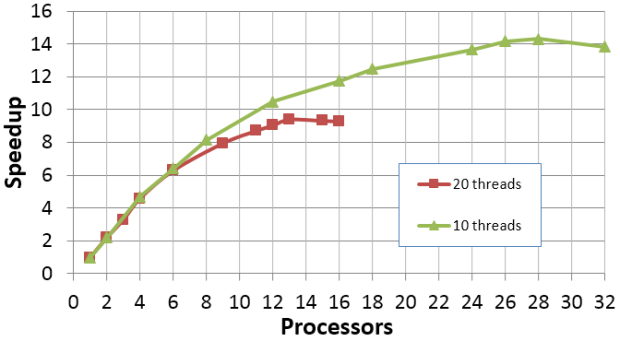 When you run parallel simulation you need remember that: