Let's start with the Breadshow definition of turbulence:

Turbulence is a three-dimensional unsteady motion in which, due to the extension of the vortices, a continuous distribution of chaotic pulsations of the flow parameters (velocity, pressure, etc.) is created in the range of wavelengths from the minimum determined by viscous forces to the maximum determined by the flow boundary conditions.

In other words turbulent flow is a flow in which motion is random in time and space. 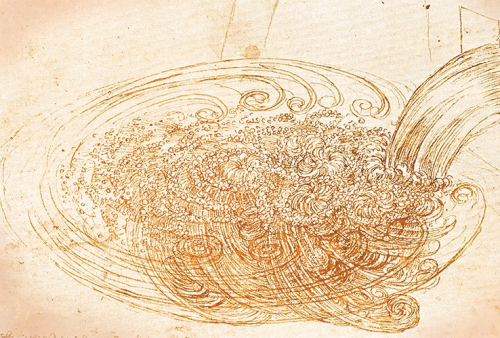 The laminar flow, in contrast to the turbulent one, is structured. The medium in this flow moves by layers, without mixing and pulsations. The figure below shows the laminar-turbulent transition in the flow: the processes of intensive mixing and vortex formation occur during the transition. 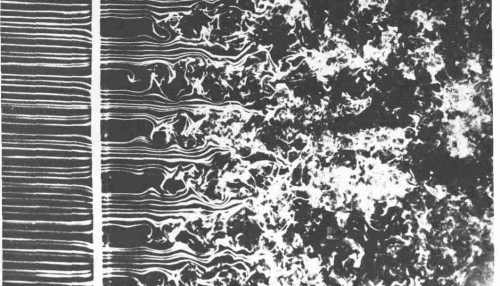 Changing the flow from laminar to turbulent

Let's consider the flow in a pipe of circular cross section and infinite length.

For a turbulent flow velocity is described by a logarithmic law (that is, the velocity linearly depends on the logarithm of the distance to the wall) except a thin layer near the wall.

Usually, when somebody speaks about a turbulent flow, one immediately recalls the Reynolds number (Re). In fact, it is the ratio of inertial forces to viscous friction forces.

For a flow characterized by a low Reynolds number, the stream will mainly depend on the viscous forces. At high Reynolds numbers, the influence of inertial forces prevails, and as a result turbulences arise.

To determine the boundary between the laminar and turbulent flows, the concept of the critical Reynolds number is introduced (Recr):

The critical value of the Reynolds number for different medium will differ:

Where do the turbulent flows appear in the real life

As it was noted earlier, the turbulent flow differs from the laminar flow not only by the velocity profile, but also by the presence of intense vortex formation. Therefore, the phenomenon of turbulence significantly affects the calculation results and must be taken into account.

The fields of application for turbulence are endless: aircraft, automotive industry, shipbuilding - modeling air motion around airplanes/cars/ships, ventilation and air conditioning - modeling air flows in rooms, ventilation shafts, aircraft and automobile cabins; a separate vast area is represented by biomechanics - blood flow modeling in the chambers of the heart, around heart valves, etc.

There are three main approaches for mathematical description of the turbulent flow:

The concept of Kolmogorov scale

The concept of Kolmogorov scale

According to the Kolmogorov hypothesis, the lower bound on the magnitude of the structures involved in the process of energy dissipation may be estimated.
The scale ηĸ, that is called Kolmogorov, characterizes the linear dimensions of structures, on which viscosity still has a significant effect.

Turbulence model is a mathematical model that allows to describe the flow behavior with the desired accuracy. As applied to RANS approaches, the turbulence model is a set of additional equations designed to close the Navier-Stokes system of equations after it has been averaged over Reynolds.

The turbulence models differ in the constants that are set in these models, as well as in the turbulent viscosity determination. The constants are predominantly empirical, and they are selected according to the characteristics of the particular task. Turbulence models can include from one to several equations, and the more equations there are, the more computing resources are required.

RANS approach allows to obtain only an averaged flow and describe it if there are pulsations in the velocity around a certain average value. This approach allows to get good results on a coarse mesh. The LES approach allows to resolve vortices that affect the nature of the flow. The results of this analysis will be more accurate, however, a larger number of calculation cells and a smaller time step will be required. To resolve all the vortices and pulsations, it is necessary to solve the equations directly (DNS): to create a fine mesh, the cell size of which will allow to resolve one vortex by several cells. The time step, respectively, should be such a value that the vortex rotation period will be also time-resolved by several steps. This approach is extremely resource-intensive and is rarely used in engineering calculations. 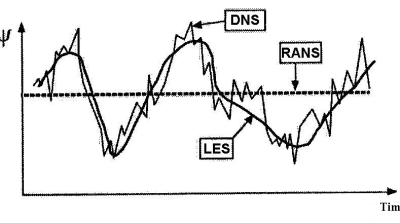 The difference in approaches on the example of the flow velocity

The energy transfer in a turbulent flow occurs in a cascade manner: energy comes from the averaged flow to the largest vortices and is subsequently transferred to more and more small vortex structures. As a result, it reaches ultrasmall vortices (with Kolmogorov scales). They dissipate kinetic energy and transfer it to a thermal state. 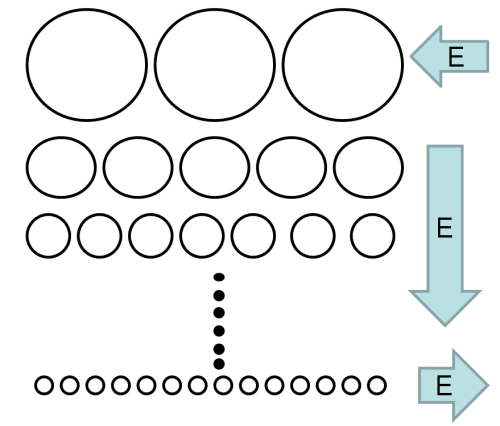 Cascade energy transfer in a flow

The transition from laminar to turbulent flow is characterized by vortex formation. The result of the chaotic motion of particles participating in turbulent mixing is the pulsation of their velocity. Therefore, in RANS approach the velocity projections can be divided into the average component and the pulsation additive:

The pulsating motion of particles, in its turn, is a source of pressure, temperature and density pulsations. The degree of flow turbulence is a measure of pulsation intensity.

The momentum transfer through the vortices is taken into account due to the additional turbulent viscosity. If we substitute the expressions for the averaged velocities into the Navier-Stokes equation and transform them, in the end some terms will be reset to zero, but the product of the averages and the product of the pulsating components will remain. The product of the pulsating components - a new unknown - is called the Reynolds stress. With this new unknown it is impossible to solve the Navier-Stokes equation together with the continuity equation. Therefore, the system of equations must be closed.

For this, the Businesk hypothesis was introduced: to consider the Reynolds stress approximately the same as the friction stresses that are associated with viscosity, i.e. like a certain viscosity, multiplied by the flow deformation. Therefore, a new variable appears - turbulent viscosity, which makes it possible to take into account the additional integral effect of the vortices, although they are not resolved by the grid.

Prandtl noted that the pulsation along y axis in the flow, which consists of the turbulent layers with vortices, is the same as along the x axis. A vortex can change its gradient in velocity and is proportional to the turbulence scale. It was proposed to consider the path length of the vortex mixing as a turbulence scale.

interaction of FLOW and WALL - what is Y+

The flow near the wall looks like a laminar one - everything moves in layers, then vortices appear, their number increases and the turbulent flow is already observed in the flow core.

Considering the coordinate of the distance from the wall in the coordinates (x, y), one can see various regions of the boundary layer. There are:

The layers scheme in the boundary layer

Considering the velocity profile in dimensionless coordinates, one can determine a number of quantities that describe the flow in the boundary layer:

dimensionless distance to the wall:

If the center of the first cell is located in the zone where Y+< 5, then it is a viscous sublayer and the flow is laminar — the profile is a parabola and also there is a parabola in the logarithmic coordinates. If 5 < Y+ < 15 then it is the mixing zone - in this place you need to connect two profiles: one is laminar, the second is turbulent. If Y+ > 30, then this is a zone of turbulence - and there is a straing line in thelogarithmic law. Depending on the region in which the center of the first cell is located, the appropriate approaches to modeling this region should be applied.

Two approaches to the modelling

It is characterized by the fact that the wall region is poorly resolved by the grid and the center of the first cell does not fall into either the viscous or buffer sublayer (Y+ > 5). In this case, a relatively coarse mesh is constructed and nobody knows what happens in the boundary layer region. Then the near-wall functions are used for the near-wall flow calculation . 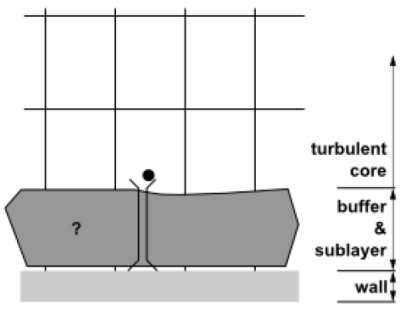 Coarse computation grid. The dot shows the center of the first cell

Wall functions are some empirical and semi-empirical dependencies designed to determine the velocity profile in the wal region. 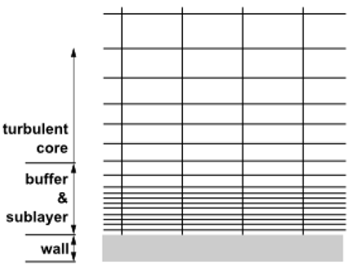 The flow with a fine mesh near the wall

FlowVision implements 7 different turbulence models. You may use one of them depending on your task:

how to set TURBULENCE IN FLOWVISION

It is necessary to set the physical process of Turbulence in the Phases tab by selecting one of the proposed turbulence models.

Turblence is set as pulsations and turbulent scale ( Prepocessor -> Models -> Initial data). These parameters determine the degree of the flow turbulization.

Formulas for calculating the input pulsation parameters and turbulence scale

RECOMMENDATIONS FOR THE wall FUNCTIONS APPLICATION IN FV

The equilibrium wall functions WFFV are set in the FV interface by default.

Об авторе / About the author 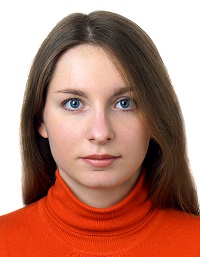