Why Advanced? Work with Real Phase Interfaces through SGGR

In the traditional approach, free surface regions are defined by VOF (volume of fluid) ratios ranging from 0 to 1 and as a result, the free surface is approximated based on VOF value distribution. On the other hand, FlowVision Advanced VOF Method accurately resolves and reconstructs the free surface topology even at a sub-grid (sub-element) level. Together with the SGGR technology, the fluid mass is fully conserved in FlowVision calculations, thus achieving ultimate accuracy.

Why Advanced? Droplet Conversion and Calculation

Another uniqueness of FlowVision Advanced VOF Method is related to regions geometrically away from free surface with VOF>0; in this case, FlowVision allows for conversion to droplets and calculates movements of these droplets through the computational domain. In the following time steps, these droplets can join back to bulk flow resulting in realistic multi-phase flow simulations.

Moving Bodies for VOF
Since 2004 FlowVision is capable of performing calculations where objects can more in 6-DOF with respect to the computational domain. The motion can be based on either user definitions (kinematic) or based on integral fluid forces and inertial forces (dynamic). 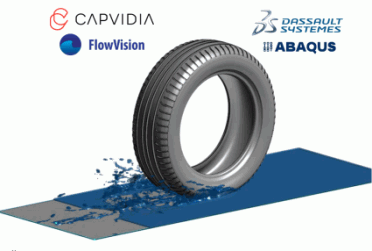 Tire Aquaplaning:
FlowVision's advanced VOF approach is extensively used in the tire industry for aquaplaning simulations. While the strict mass conservation is ensured through advanced VOF, lossless data transfer between Abaqus and FlowVision is done through FlowVision Multi-Physics Manager (MPM).

When advanced VOF is combined with moving bodies capability (and Gap Model for some cases) the following problems can be attacked: