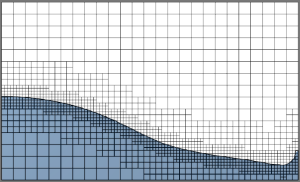 In previous versions settings of computational grid was located in different subsections of section “Subregions”. It was not useful to find settings in different locations:

In version 31001 all these settings located inside separate section “computational grid” (fig.1) 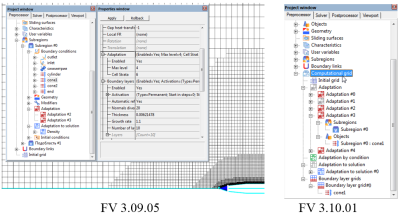 Highlight of activity in the project tree

Adjustment of adaptation or boundary layer grid for objects

Adjustment of adaptation now looks differently. To specify adaptation or boundary layer grid you need to do following:

2. Then it is necessary to specify subregion where adaptation acts. RMB click on subsection “Subregions” and choose “Add/Remove”.

In the appeared window choose the required subregions and click “Add” then press “Ok”. 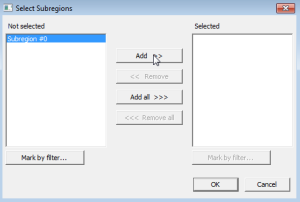 3. It is necessary to choose Objects for adaptation by the same way in subsection “Objects”. These objects may be geometrical objects existing in preprocessor or BCs. RMB click on “Add/Remove BC” or “Add/Remove Objects”.

4. In the appeared window choose the required BCs or Objects and click “Add” then press “Ok”. You can also mark them by filter, what makes multiselection more useful. 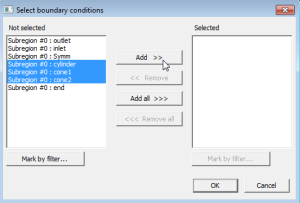 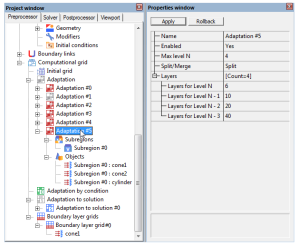 Grouping of Objects with the same settings of adaptation

Fig. 1 shows the example when for three BCs “cone1”, “cone2” and “cylinder” was set the adaptation with the same settings.

It is showed in previous section of this paper, that in new version separate subsection «Adaptation #..» can act on these BCs simultaneously (Fig.2) as well as on set of geometrical objects. It is very useful when there are great number BCs or geometrical objects or subregions, which have the same settings for adaptation.

It became a little more ”cleverer”. In particular due to common settings of adaptation on BC with layers of intermediate levels (Fig.2), it do not merge cells of these “layer cake” (Fig.3) 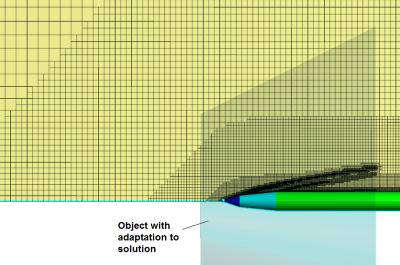 Besides list of available variables for adaptation to solution became wider: now this list include all variables available for post-processing including user variables

This is the new function allowing to make split of cells according to specified condition (range of values for variables). Unlike adaptation to solution with option “to value” adaptation by condition have following features:

Fig. 4 shows the example with adaptation by condition of variable VOF. It is specified range of variable VOF for which splitting of cells will be performed. In this example it is ensured that free surface always moves inside the grid with the same cell size. Therefore, negative numerical effects minimized because grid is not changes on free surface itself. 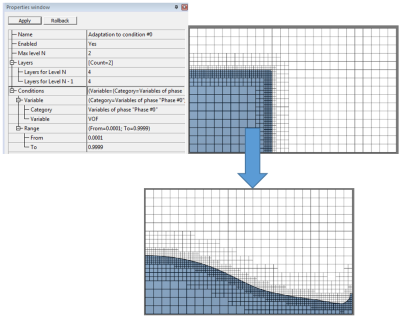 Note, that for making such “tracking” grid from the beginning of the solution it is necessary perform some actions in addition to settings on Fig.4: 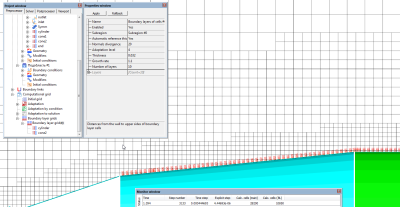 Features of projects conversion from previous versions to 31001

Unfortunately it is not possible to make full conversion of settings from projects created in previous versions. Therefore:

!!! It is strongly recommended to check all settings of computational grid when you opening such project in new version

Better to make settings again, then grid creation will be more optimal and reliable.

However, due to little other order of build creation user should be ready that mesh and number of cells will be slightly different.

The main rules of conversion are following:

!!!Surely check the settings of activations for all (main and sub-sections) adaptations when opening project in new version 31001

Individual activation settings of sub-sections “Adaptation #..” in 31001 gets their settings from corresponding sub-sections in projects of previous version (Fig.7, green arrow).