The valve stem seal is an important part of any internal combustion engine. The seal supplies a lubrication of valve stem and limits emission of oil. To design reliable and long-life stem seals a numerical simulation of the seal work is used. Numerical simulation helps to understand the main features of the stem seal working cycle and estimate the changing seal characteristics because of seal aging processes. The problem of oil flow via stem seal involves fluid-structure interaction between an oil flow induced by oscillating stem and deformable seal made from rubber. The Fluid-Structure Interaction Problem is solved numerically by using two codes: Abaqus/Explicit to get deformation of rubber seal and CFD code FlowVision to simulate oil flow. 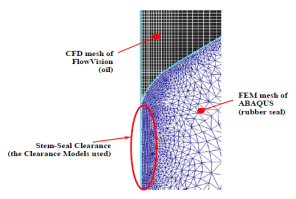 Both codes are two-way coupled by Multi Physics Manager. Simulation of the oil leakage through valve stem seal was studied for different engine rpm and for different rubber

elasticity. Results from analysis show the strong dependence of the leakage on engine operating condition and elasticity of the rubber. Increasing engine speed and elasticity of the rubber result in increasing oil leakage through the seal. Moreover, increasing elasticity resulted in faster growth of the leakage with higher engine rpm. Also we found that during stem oscillation the rubber has complex motion. This motion results in wave-like changing of the clearance between the valve stem and the seal. Investigation of this effect allows predicting more accurately the properties of the valve stem seal.